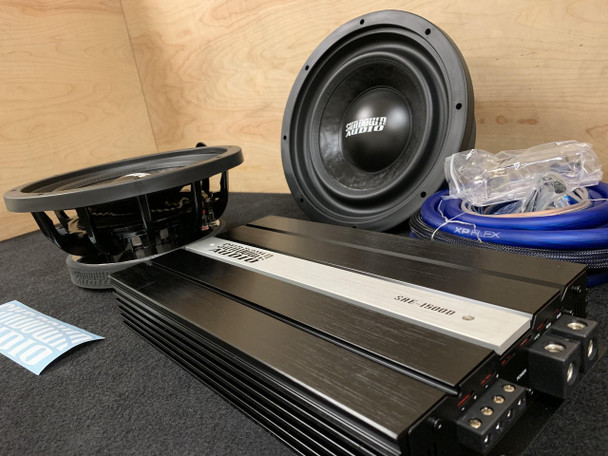 THE INITIAL PRICE IS OF THE AMPLIFIER ONLY. ONCE YOU SELECT SUB SIZE IT CALCULATES PRICE ACCORDINGLY

The SD-4 series is our premier sealed box offering & is the successor to the SD-3. We started off this design knowing that the majority of sealed box applications today face a depth restriction so each SD-4 model was designed to have the lowest depth possible while still maintaining a large window of mechanical cushion (about 2” p-p maximum mechanical travel for all models). We do not consider the SD-4 an “ultra-shallow” but they are as shallow as possible and feature several techniques to reduce the effective depth required.
As mentioned above; the SD-4 series effectively requires less depth than other woofers that are more physically shallow. First of all they lack a pole vent, thus, require no room for air venting behind the motor. This allows the motor to be completely flush against the back wall of the enclosure. To allow for efficient air-cooling we added vent channels on the OD of the pole and side-firing gap venting. Secondly the entire SD-4 series features an all-new foam “W” shape surround – this reduces the space required in front of the woofer gasket to about 1” total. So, despite not being an “ultra-shallow” woofer they have an effective total depth requirement of about 2” less than most traditional woofers of an equal depth. The fourth generation series also upgrades to NEO motors to reduce angled depth requirements substantially versus the SD-3 series!
The SD-4 series truly is a world-class sound quality woofer with low mounting depth, small box requirements, and a reasonable price. This line features an under-hung motor topology – this means that the voice coil is shorter than the top plate so the amount of winding in the gap doesn’t change at all over the center portion of stroke – in this case featuring a 1” thick top plate and ½” long 8-layer copper voice coil. This allows for 14.5mm linear excursion one-way while maintaining an extremely flat BL curve. The all new “W” surround design and newly tooled spider work together to create a flat “center” compliance curve which quickly turns progressively stiffer past the linear limits of the motor. This was heavily optimized in 3D computer simulations. This makes the SD-4 significantly more mechanically rugged than the previous generation. To top off distortion reduction features the SD-4 features a shorting ring around the bottom of the pole-piece to even out the LE curve.

We borrowed some technology from our large high-excursion woofers and incorporated a hyper-extended pole-piece into the SD-4 line. This helps to prevent voice coil rocking & related damages at higher levels of stroke, especially past linearity of the motor. Thanks to our extensive experience in building high-stroke subwoofers we were able to ruggedize a shallow platform as well.

The parameter set has been optimized for very small sealed enclosures for this line. As opposed to the outgoing SD-3 series the 4th generation will tolerate a ported box when necessary.

MSRP:
NOW: $307.99
Was:
NOTE: Initial pricing is of amp only until you select your sub size and it will be calculated accordingly   SUNDOWN SINGLE SUB BANGIN PACKAGE   1- Sundown SIA-2500 Amplifier 1- Sundow
D4S-P12

MSRP:
NOW: $307.99
Was:
NOTE: Initial pricing is of amp only until you select your sub size and it will be calculated accordingly This package contains  1x Sundown SIA-1750D2x Sundown Audi
D4S-P-SD-eseries

MSRP:
NOW: $189.99
Was:
NOTE- THE INITIAL PRICE IS OF THE AMPLIFIER ONLY. ONCE YOU SELECT SUB SIZE IT CALCULATES PRICE ACCORDINGLY This package contains 1x Sundown SAM-500 (MINI AMP)1x Sundown
D4S-P-SD-SHALLOW500

MSRP:
NOW: $307.99
Was:
NOTE: Initial pricing is of amp only until you select your sub size and it will be calculated accordingly This package contains  1x Sundown SIA-1750D2x Sundown Audio Ev4 D4 ohm subs (select...
D4S-P-SD-eseries